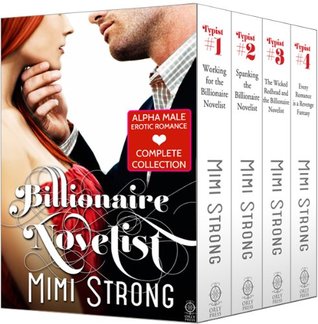 Tori is twenty-three, with a temper to match her flaming red hair.

When Tori shows up at Smith's secluded cabin in Vermont for a typing contract, their sparks threaten to burn everything down. What they don't know is that each has a secret that's too painful to reveal.

Book 1: Smith vows to keep his hands to himself, but Tori doesn't care for rules. When she looks into his beautiful eyes, she wants to be naked, in every way.

Book 2: The wealthy novelist Smith Wittingham and his typist, Tori, push each other to their breaking points, but neither will submit to the other for more than one night. When Tori finds out one of Smith's schemes, she tries to run away, but he won't let her.

Book 3: To avoid cabin fever, Smith and Tori leave Vermont, only to find themselves in a new type of fever in Montreal. Between the sex shops, a rock concert, and an unexpected naked reunion with an old flame, Tori's world is unraveling. The final blow is Smith revealing his dark secret--the secret that torments him like a ghost.

Book 4: Before Smith became the Bad Boy of Publishing, he was a different man. He was once a lovestruck teenager, and a smitten newlywed. That was before love, and a woman, destroyed him. Alone in Montreal, Smith must decide what Tori means to him, and how far he'll go to make amends. His other option is to continue on his path of self-destruction.