Review: Second Grave on the Left by Darynda Jones 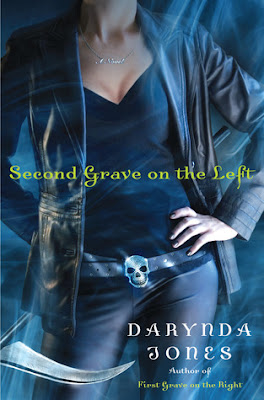 Title: Second Grave on the Left

When Charley is rudely awakened in the middle of the night by her best friend who tells her to get dressed quickly and tosses clothes out of the closet at her, she can’t help but wonder what Cookie’s up to. Leather scrunch boots with a floral miniskirt? Together? Seriously? Cookie explains that a friend of hers named Mimi disappeared five days earlier and that she just got a text from her setting up a meet at a coffee shop downtown. They show up at the coffee shop, but no Mimi. But Charley finds a message on the bathroom wall. Mimi left a clue, a woman’s name. Mimi’s husband explains that his wife had been acting strange since she found out an old friend of hers from high school had been found murdered a couple weeks prior. The same woman Mimi had named in her message.

Meanwhile, Reyes Alexander Farrow (otherwise known as the Son of Satan. Yes. Literally) has left his corporeal body and is haunting Charley. He’s left his body because he’s being tortured by demons who want to lure Charley closer. But Reyes can’t let that happen. Because if the demons get to Charley, they’ll have a portal to heaven. And if they have a portal to heaven…well, let’s just say it wouldn’t be pretty. Can Charley handle hot nights with Reyes and even hotter days tracking down a missing woman? Will Cookie ever get a true fashion sense? And is there enough coffee and chocolate in the world to fuel them as they do?

Just as much fun as the first book in the series. I liked it so much jumped right in to the next book before writing this review (mistake on my part). Charley finds out more about her "powers" and we find out more about Reyes, son of Satan. This time Cookie gets Charley mixed up in a new case.
(Sorry for the short review)


So far there are 5 books in the series:

First Grave on the Right
"For I Have Sinned"
Second Grave on the Left
Third Grave Dead Ahead
Fourth Grave Beneath my Feet
Fifth Grave Past The Light
by Lbrychic @ 1:50:00 AM
Email ThisBlogThis!Share to TwitterShare to FacebookShare to Pinterest
Tags: Charley Davidson, contemporary, Darynda Jones, fiction, paranormal, reviews