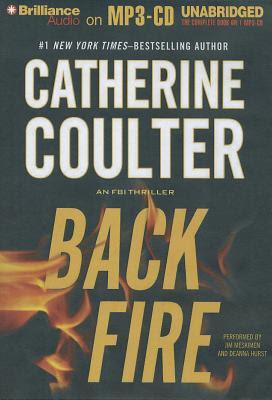 For what you did you deserve this.

The mysterious note delivered to FBI agent Dillon Savich has him and his partner, Lacey Sherlock, on edge, just as they’re starting an investigation into the shooting of their longtime friend Ramsey Hunt. The San Francisco judge was shot in the back during a high-profile murder trial—and now Sherlock's and Savich’s search for the truth will take a shocking turn that no one could have seen coming…

My Review:
Another Great Listen. I can't get enough of Savich and Sherlock. In this story, we get to see more of Molly and Emma and "Judge Dredd" Ramsey Hunt from The Target. It's been more than 5 years since the incidents that occurred in The Target. Savich and Sherlock head back to California at an ideal time since Savich just received an anonymous note at the FBI offices threatening Savich. We now meet Eve (Deputy Marshall) and Harry (FBI) who team together to sort out who shot Judge Hunt.

Newest in Series just came out in July -- Bombshell

First in a new FBI Series: A Brit in the FBI #1 -- The Final Cut comes out in September.  Review to come soon. I won an advance copy from Firsttoread.com. (Penguin Books)
by Lbrychic @ 2:07:00 AM
Email ThisBlogThis!Share to TwitterShare to FacebookShare to Pinterest
Tags: Audiobook, contemporary, reviews, romance