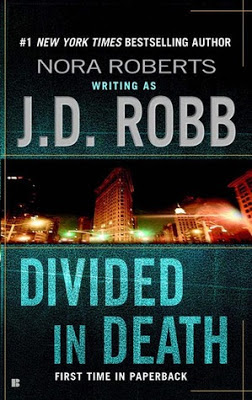 Book Blurb:
Reva Ewing was a former member of the Secret Service, and then a security specialist for Roarke Enterprises—until she was found standing over the dead bodies of her husband, renowned artist Blair Bissel, and her best friend. But Lieutenant Eve Dallas believes there was more to the killings than jealous rage—all of Bissel's computer files were deliberately corrupted.

To Roarke, it's the computer attack that poses the real threat. He and Reva have been under a Code Red government contract to develop a program that would shield against techno-terrorists.

But this deadly new breed of hackers isn't afraid to kill to protect their secret—and it's up to Lieutenant Eve Dallas to shut them down before the nightmare can spread to the whole country.

My Review:
Well this will just be short and sweet. I continue to love this series especially in the audio format. Susan Ericksen does a fantastic job with the voices in this series.
You won't want to miss this story. Find out more about Dallas' past. We also learn a little more about Caro, Roarke's admin. The only time Caro asks for Roarke's help since Reva is her daughter.

On to the next In Death -- Visions in Death.
by Lbrychic @ 1:49:00 AM
Email ThisBlogThis!Share to TwitterShare to FacebookShare to Pinterest
Tags: Audiobook, In Death, JD Robb, reviews