ARC Review: Dancing with the Devil by Keri Arthur 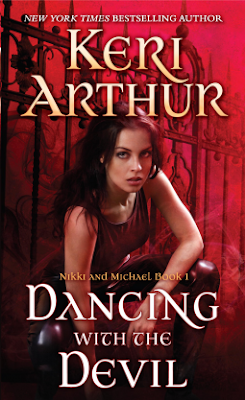 Title: Dancing with the Devil

Source: ARC provided by publisher via NetGalley in exchange for an honest review.

Purchase for Nook or Kindle

Private Investigator Nikki James grew up on the tough streets of Lyndhurst and believes there’s nothing left to surprise her. But all that changes the night she follows a rich man’s daughter into the shadows and finds herself caught in a war between two very different men. One is a madman, intent on destruction. The other has his own heart of darkness.

For three hundred years, Michael Kelly has existed in life’s shadows, gradually learning to control his vampire cravings. He is convinced that no one can breach his formidable barriers—until he meets Nikki. With her powerful psychic abilities, Nikki swiftly invades both his mind and his heart. Nikki knows how dangerous love can be . . . but if she wants to survive, she must place her trust in this man who could easily destroy her. For only together can they overcome the evil threatening to destroy them both.

Well first off, I think I read this a long time ago after it was first released but still read it again. Back then It was hard for me to find anything by Keri Arthur. This is her first book from way back when. She is now a New York Times Best Seller. It was a pretty quick easy read. I believe the first book gives you enough information to want to read the rest of the series.
by Lbrychic @ 11:23:00 PM
Email ThisBlogThis!Share to TwitterShare to FacebookShare to Pinterest