Enter the Charmed Again contest for a chance to win an iPad Mini. Details at www.rosepressey.com

Rose Pressey, the author of "Forever Charmed," is having another contest to promote her newest release "Charmed Again." 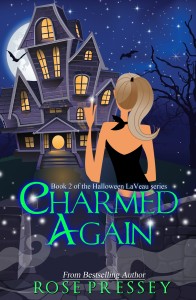 Blurb from her site:
Reluctant witch Halloween LaVeau never guessed that inheriting LaVeau Manor would be so difficult. Sure, she was named Worst Witch of the Year, but her botched spell-casting is all behind her now, right? Everything changed after discovering the ancient Book of Mystics. She’s now the leader of the Underworld… whatever that means. Apparently, she’s in charge of keeping order within the paranormal world.
If that wasn’t enough, Halloween—or Hallie as she prefers to be called—has two gorgeous men making her life even more confusing. The sexy vampire Nicolas Marcos has been accused of stealing another witch’s powers. With the help of Nicolas’ brother, the good-looking warlock Liam Rankin, Hallie must discover if Nicolas is guilty as charged. How will she navigate this Underworld?
by Lbrychic @ 8:14:00 PM
Email ThisBlogThis!Share to TwitterShare to FacebookShare to Pinterest
Tags: contests