Review: The Summer I Became A Nerd 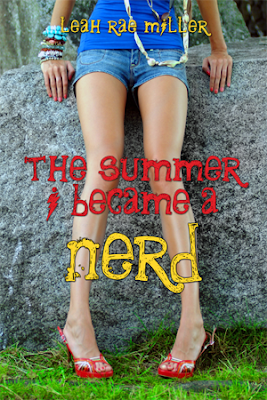 Title:   The Summmer I Became A Nerd

On the outside, seventeen-year-old Madelyne Summers looks like your typical blond cheerleader—perky, popular, and dating the star quarterback. But inside, Maddie spends more time agonizing over what will happen in the next issue of her favorite comic book than planning pep rallies with her squad. That she’s a nerd hiding in a popular girl's body isn’t just unknown, it's anti-known. And she needs to keep it that way.

Summer is the only time Maddie lets her real self out to play, but when she slips up and the adorkable guy behind the local comic shop’s counter uncovers her secret, she’s busted. Before she can shake a pom-pom, Maddie’s whisked into Logan’s world of comic conventions, live-action role-playing, and first-person-shooter video games. And she loves it. But the more she denies who she really is, the deeper her lies become…and the more she risks losing Logan forever.

Leah Rae Miller did a wonderful job for her first novel.
Ever felt out of place? Feel like you'll be embarrassed by peers if they found out your hobbies or fave things?
I believe anyone who reads this book will know exactly how Maddie feels. While not everyone is a cheerleader or jock, I think we all have a lil nerd living inside us. *grins*
One quote I really liked in the story: "Be true to yourself and others will be true to you, too"


Let's all let our NERD out!!!!
by Lbrychic @ 2:20:00 AM
Email ThisBlogThis!Share to TwitterShare to FacebookShare to Pinterest
Tags: reviews