Review: The Name of the Star 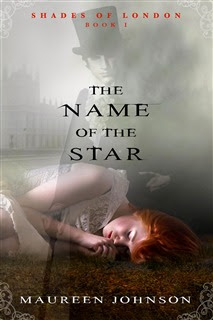 Title:  The Name of the Star

The day Louisiana teenager Rory Deveaux arrives in London marks a memorable occasion. For Rory, it’s the start of a new life at a London boarding school. But for many, this will be remembered as the day a series of brutal murders broke out across the city, gruesome crimes mimicking the horrific Jack the Ripper events of more than a century ago.
Soon “Rippermania” takes hold of modern-day London, and the police are left with few leads and no witnesses. Except one. Rory spotted the man police believe to be the prime suspect. But she is the only one who saw him. Even her roommate, who was walking with her at the time, didn’t notice the mysterious man. So why can only Rory see him? And more urgently, why has Rory become his next target? In this edge-of-your-seat thriller, full of suspense, humor, and romance, Rory will learn the truth about the secret ghost police of London and discover her own shocking abilities.

My Review:
This was the book for our last Teen book club for the school year at my library. My coworker basically shoves it at me and says "You'll enjoy it!" I was iffy about it at the time but she was right I read this over the span of several hours over two days. Definitely Young Adult, but enjoyed it. Slightly different than most stories I've read. Page turner, Could hardly put it down.

When Rory's parents get jobs in England, Rory chooses to go to a boarding school several hours away from where her parents. Rory ends up going there first because a Hurricane has come through Louisiana and screws up flight schedules.
When she arrives, she finds out there was a murder nearby. News gets out that it was done just like Jack the Ripper in the 1800s. Is there an copycat? Will more murders happen?
Something happens to Rory during a mealtime with her classmates/friends. She develops an odd rare ability and ends up with a small group who help her with this ability. First in a series.

by Lbrychic @ 1:04:00 AM
Email ThisBlogThis!Share to TwitterShare to FacebookShare to Pinterest
Tags: reviews